Behind the Scenes of the Madison Fox Series

For additional extras, including short stories, deleted scenes, and excerpts, be sure to sign up for the VIP newsletter. Some extra content is exclusive to the newsletter, and some will eventually show up here, but you’ll see it months earlier in the newsletter.

Madison finally gets her date with Dr. Love—and if they had picked any other restaurant, she might have had a chance of enjoying it, too…

(Read after A Fistful of Fire to avoid spoilers.)

“Madison Fox: The CIA Files” is a tongue-in-cheek companion to A Fistful of Evil. Inside, you’ll find the dossier the CIA (Collaborative Illumination Alliance) commissioned on Madison and an eye-opening look at Mr. Pitt’s true feelings about hiring Madison, including how he explained his decision to the higher-ups.

The link will take you to BookFunnel, a file-delivery site that can help you load the document onto any device you want (ereader, phone, tablet, or desktop). They can also help you troubleshoot any problems you might encounter, whereas I would only be able to wring my hands and point you toward Google. 🙂

SPOILER ALERT: Save this dossier to read after you finish A Fistful of Evil.

Shortly after A Fistful of Evil, Madison was approached by Enforcer magazine for an interview. Since we rarely get to see Madison outside the novels, I thought I’d share.

SPOILER ALERT: Save this interview to read until after A Fistful of Evil.

Not all scenes make the final cut when I edit. A lot of times, the scenes that get deleted aren’t worthy of public consumption.

But every once in a while, I delete a scene because, although good or fun, it doesn’t fit into the overall story. This is one such scene. It takes place the day after Madison bonds with Jamie, the pooka.

Download your copy of “The Point of No Return” HERE.

SPOILER ALERT: If you haven’t read A Fistful of Fire, this deleted text contains spoilers. Read at your own risk.

"Evil Housekeeping 101" - A Deleted Scene from A Fistful of Frost

When I first wrote A Fistful of Frost, it had a drastically different beginning.

I liked it, but ultimately I had to cut it.

Now, I get to share that beginning with you in this deleted scene:

How Madison Fox Came to Be

Where did the idea for A Fistful of Evil come from?

The story came to me on a sleepless night.

I was working a ulcer-inducing job that inspired me to spend my off hours arguing in my head with my horrid coworkers, replaying all the things I wished I could say (or had said) to their faces.

To distract myself from the negative storm in my thoughts, I practiced a visualization exercise, picturing my cat, who was snoozing next to my pillow. I envisioned how she would look if I could see her soul, all bright white and full of good energy.

And Madison Fox was born.

I wrote the novel fast, all in one month, and I stole rather shamelessly from my own life to speed the process along. (See the images on this page under “Madison Fox in the Real World.”)

At the time, every urban fantasy heroine on the shelves was a total badass.

They could cut through a horde of rabid werewolves while single-handedly deflecting the attacks of a clot of blood-sucking vampires.

Most were shapeshifters, powerful mages, or part vampire.

I wanted to write something different. I wanted an everywoman character.

I wanted a heroine who had a cat she enjoyed snuggling with, friends who were utterly normal, and parents who drove her a little bonkers.

Madison became the character I needed in my life at the time. Honestly, I think she’s a character many people need in their lives: someone with a lot of heart who is funny, even when she doesn’t intend to be.

Madison Fox in the Real World

When I sat down to write A Fistful of Evil, I was in the middle of a very busy month of work and I was attempting NaNo WriMo for the first time. (NaNo WriMo challenges authors to write an entire book the month of November.)

I didn’t have more than a character idea: I knew I wanted a woman who could see souls. That was it.

Crunched for time but still desperately needing the creative outlet of writing, I was looking for ways to throw a story together quickly, so I stole from my own life. I didn’t use people, but I happily marched Madison through places I went daily.

This ended up being one of my favorite parts of the series—it’s all set in my backyard.

Shhh, don’t tell anyone. This is the undercover location of Illumination Studios, where Madison works. It looks an awful lot like the building where I was working at the time.

Madison’s apartment was my apartment. Have you ever lived on the third floor? The people who rent you that apartment will tell you it’s only a pain on the days you move in and out. They’re wrong. Those two flights of stairs are a pain every time you bring home groceries. Or take your bicycle out for a ride. Or, say, when you sprain your ankle, as I did.

Fortunately, Madison hasn’t experienced the ankle problem, but she did lug a car-full of plants up to this apartment, for which I felt extreme sympathy for her.

If you’re Madison, and you’ve got something to prove, this construction site is a good place to start…or to make a fool of yourself.

Here’s a little-known fact: When I wrote the first draft of A Fistful of Evil seven or eight years before it was published, this housing development was just getting started (as it is in the novel). When I abandoned Madison for another project, the construction also stopped. It wasn’t until I returned to A Fistful of Evil and was getting the final edits wrapped up that development resumed here.

Some might say this was a coincidental connection due to the housing bubble that burst and the wee global recession that followed it. I say the development was waiting until Madison and I no longer needed it.

Believe what you will.

Mmm. Dr. Love. Mrowr. Ahem, I mean, yes, this actually was the location of my cat’s vet. The vets opted not to use a cutesy pun name and instead incorporated the nearest street into their name. (Boring.) Also, all the vets on staff were female, so unfortunately veterinarian Alex Love is a complete figment of my imagination. Lucky Madison…

It’s hard to believe, but there is no building eight stories tall in Roseville. We’re a low-to-the-ground city. The tallest building might reach six stories, but it’s on the west side of Roseville, outside of Madison’s territory. However, there is a hotel next to a greenbelt. Also, we’re too close to Sacramento to warrant hotels with convention centers, so this hotel has yet to host a gamer’s convention. 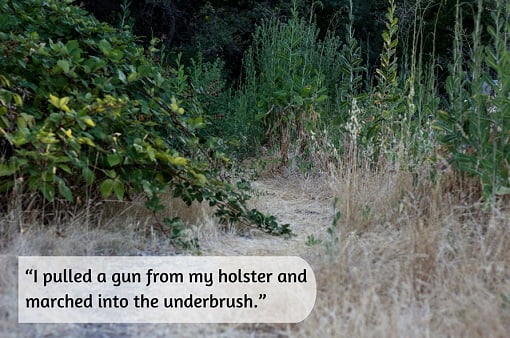 When I first moved to Roseville, I walked the same green belt trail as Madison (albeit without guns). The trail no longer exists, erased with the progress of the housing development, but years ago it was a beautiful and fun place to explore.

At least it was fun for me. Madison would no doubt disagree.

The novel wouldn’t be complete without Mr. Bond. If you read the copyrights page, you know Mr. Bond is a direct literary translation of my cat (though Mr. Bond is not my cat’s name).

When we found my Mr. Bond in a Dumpster, he was tiny and Siamese.

Then he grew up and darkened, proving he was a beautiful mutt, and possibly a descendant of a yet-undiscovered prehistoric mammoth house cat. He weighed more than the average two year old, and back when we lived in Madison’s apartment, my bookcases would shake against the walls when he ran down the hallway. Who knows what the downstairs neighbors thought was happening.

Thus concludes our Roseville tour. See how shamelessly I stole from the world around me? I feel no remorse, either. Mwahahah!

Copyright © 2021 Rebecca Chastain. All rights reserved. Privacy Policy
This site uses affiliate links for Amazon, Kobo, Google Play, and Apple Books. When purchases are made through these links, Rebecca earns a small commission at no additional cost to you. Thank you for your support!